Personalizing Handling For Your Car

If we take a quick glance at the diversity of people in regards to wants and needs, you'll see that "One size fits all" doesn't really fly. Due to this diversity, you'll see cars of different classes and price brackets, all tailored to fit a target audience. In this regard, the priority of vehicle suspension and the type of suspension used varies with the application. For example, sharp, responsive handling is a priority for sports cars, whereas for SUVs and sedans, and emphasis may be placed on cruising comfort. In the automotive bell curve, you'' find that mass produced vehicles are built on the premise that the suspension should not provide discomfort while driving. To achieve this goal, an equal balance of handling stability and riding comfort is emphasized. It is only natural that a driver who wants to experience a sportier drive would want to bring out capabilities in their vehicle that could not be achieved through the offerings of a mass-produced vehicle. The beauty of vehicle tuning, is that it allows those who seek more power, sharper handling, etc to fulfill their goals.
Refining Transient Driving Characteristics, The AutoExe Way
AutoExe's suspension seeks to increase the relationship between car and driver, bringing them in sync and heightening interaction. This concept builds on the concept of Jinba-Ittai, the idea that a horse and the rider are unified as one. This harmony can be felt when cornering; the relationship starts when you begin to turn the steering wheel and the car begins to roll. When you are able to trace a line accurately, the relationship between man and machine is brought to new heights. This sensation of driving which could not be achieved at the mass-production level is what AutoExe seeks to bring to you. Here's how Autoexe's tuning method achieves this handling target, step by step.
Spring Ratio
Determining the correct spring setting is important, as this will determine the roll rigidity (amount of roll). Although it's true that the lower the vehicle's height is, the lower the center of gravity becomes, the distance between the center of gravity and roll center also changes, forcing the roll to become stronger. In addition, if the suspension stroke is shortened too much, the vehicle can bottom out frequently (Riding on bump stop bushing). In order to prevent the aforementioned shortcomings, it is necessary to increase the spring rate to match the height reduction, but in doing so, the ride comfort deteriorates.
AutoExe judges driving, comfort and safety on the street from multiple perspectives, and uses a general reduction of around -20mm for sports cars and -25mm for SUVs with a high center of gravity. Once the appropriate amount of height reduction is determined, the minimum required spring rate is determined based on the sprung weight of the vehicle. Their tuning philosophy aims to acquire handling characteristics that match the driver's expectations without sacrificing ride comfort during urban driving. Depending on the vehicle, the spring constant is increased around 10-30% higher than the factory spring rate. When combined with the specially chosen damping force, a fine balance of ride quality and maneuverability is achieved. An exception to this rule is the AutoExe Ultimate Sports suspension kit, which gives the highest priority to handling and roll rigidity; ride comfort takes a back seat for this specific kit.
Accurately Setting Damper Force 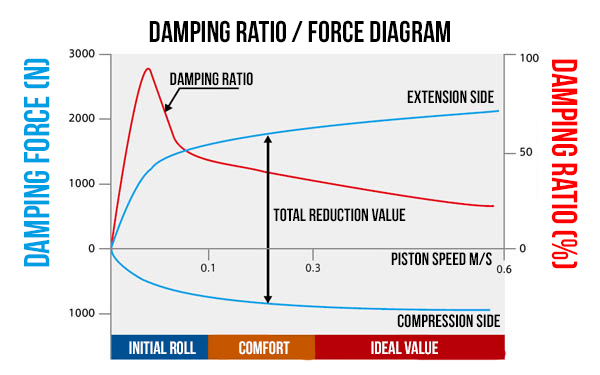 The job of a suspension damper is to convert the vibration energy of the spring into thermal energy while reducing it. As seen on the diagram above, Autoexe's damping ratio* has the damping force emphasis placed at low speeds, where initial roll rigidity begins to be affected (Blue Box Area). Every single line of AutoExe dampers have been designed to offer the highest priority on extension at the very low speed range, where piston speeds range from 0 - 0.1 m/sec. The reason for doing this is simple; The damping force of the damper is rated as a value at 0.3m/sec, however the initial roll that occurs at the entrance of a corner or turning is done in a smooth manner as this happens below the rated value (specifically speaking, where the damper begins to move).
By increasing the damping force in a sharp curve (initial vehicle roll) from a very low speed range (shock movement speed) where the piston speed is 0.05 m/sec or less, the roll speed from the moment the steering is turned is suppressed. By reducing the roll angle (deg/sec), the fear of sudden roll is decreased, as the car rolls gently for an heightened sense of security when cornering. The increase in damping force goes away after speeds of 0.1 m/sec to provide the accurate energy absorption over dumps and road imperfections. The total damping force value is allocated on the extension side while being kept low on the compression side for the same reason (Blue box area). All AutoExe dampers are designed to be as close to the ideal value** as possible (Red Boxed Area)
*This is the ratio between the damping force of the damper and the critical damping force (the last-minute damping force that determines whether or not the spring vibrates)
**The standard of development is a piston speed of 0.05/0.1/0.3 m/s and a damping ratio of 70/50/30% respectively
The blue line marks the ideal curve which shows the absolute value of the damping force. The damping ratio curve is marked by the red line which is the same as the concept of damping ratio (index of how hard the springs move). The damper is more effective (higher damping ratio) when the piston speed is lower.
In the world of aftermarket dampers, adjustability of damping force has become mainstream (A marketing feature?), yet AutoExe has stuck with fixed (non-adjustable) damping. As AutoExe's damper design places emphasis on the low-speed movement when the damper begins to rise, adopting a fixed piston results in a simpler path for the damper oil. By eliminating the extra oil paths from the adjustment system, the wasted pathways for oil are gone, allowing the damper oil's resistance to be converted into damping force more efficiently. This design increases the initial response of the car by delaying the speed of roll, squat, and nose dive without increasing the spring rate; this applies irrespective of whether the damper is mono-tube or twin-tube.
AutoExe's suspension suite is more than just spring and dampers - they include adjustable stabilizer links, sports tie rod ends, anti-roll bars and hardened bushings. The use case for each of these individual items will be covered in future articles.
Previous Post
Next Post