SARD Racing is a well-recognized name in the world of Toyota/Lexus racing and parts tuning, and rightfully so. SARD has long been a participant in motor racing, and has been a Toyota backed team for over 3 decades. SARD Racing’s efforts and long-standing partnership with Toyota has allowed them to help each other in a number of ways, most notably in the development of the world’s first racing hybrid system.

The Toyota Hybrid Le Mans racing project has enjoyed a number of victories in the World Endurance Championship (WEC), with their first hybrid entry in 2012. At the time, the TS030 Hybrid was the first gasoline-hybrid racecar to compete in the WEC, yet this wasn’t Toyota’s first experimentation with hybrid racing technology. In 2006, SARD Racing was able to enter into the Tokachi 24-hour endurance race with a Lexus GS450h with Toyota’s support. The Lexus GS450h had a combined output of 341 bhp, the same as the standard roadgoing car, however the hybrid system was fitted with a capacitor as racing conditions require rapid recharging and discharging which the standard nickel-metal hydride battery would not be able to provide. The car able to finish the race in 17th out of 33rd place without any problems. 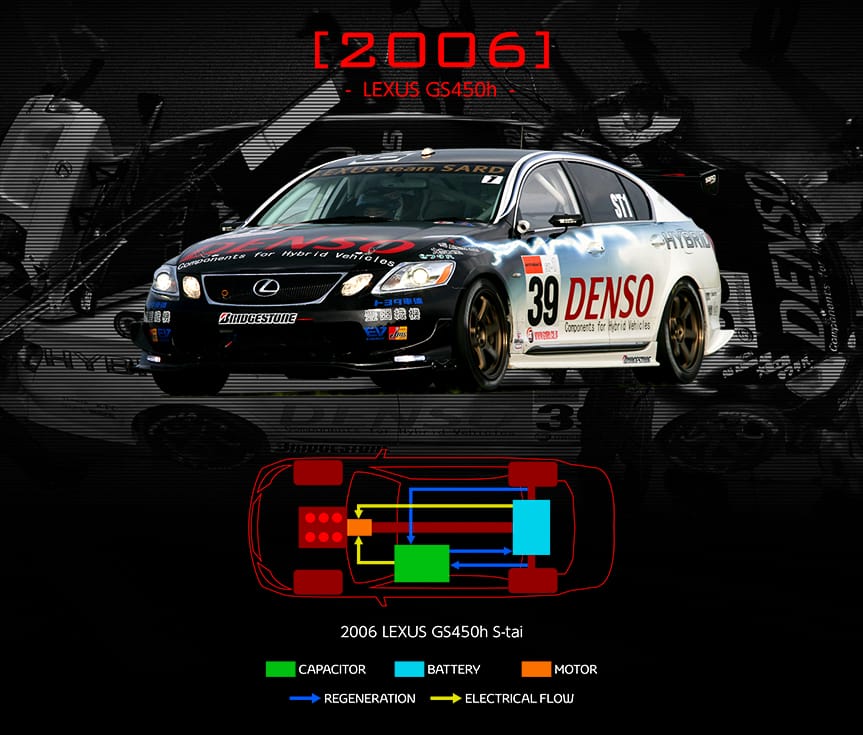 Image Source - Toyota Following the success of the GS450h, SARD and Toyota used the precious data taken from the 2006 Tokachi race to develop a fully purpose-built racing hybrid system for the 2007 season. The racecar used for this race started out in life as a GT500 Specification MK4 Toyota Supra which was equipped with a naturally aspirated 480PS 4.5L V8, however the hybrid system added a 150kw motor/generator unit (MGU) across the rear axle and two 10kW in each front wheel, effectively making the car all-wheel drive. Although the power available to the front wheels was miniscule, its main advantage was being able to recover energy at more locations. Instead of a heavy hybrid battery like the one used in the GS450h, only the fast-acting capacitor was used for storing and supplying electrical power, allowing the Supra to weigh in at just 1,080 kg. 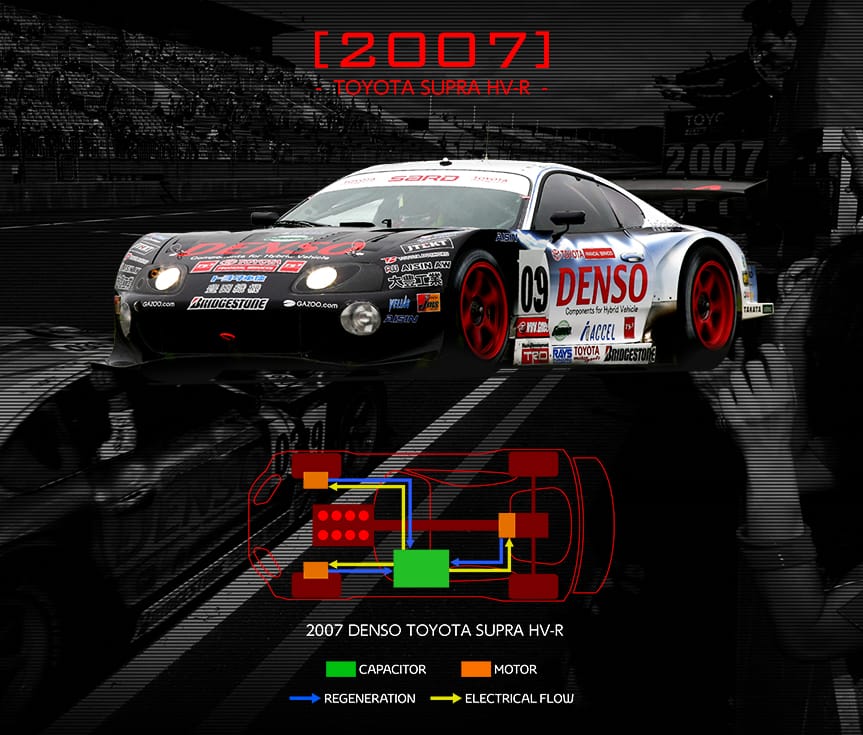 Image source - Toyota The hybrid Supra, dubbed the HV-R ran a trouble free 616 laps (1,944 miles) in the 24 hours, placing first place overall and 19 laps ahead of the second-place finisher. In addition, the hybrid system allowed for the Supra HV-R to achieve 10% better fuel economy over the GS450h while having more power; the 10kW MGUs on each wheel reduced the front brake wear by less than half of what was initially expected. The Supra HV-R became the first hybrid racecar to win a race and laid down the framework for Toyota’s future hybrid programs.