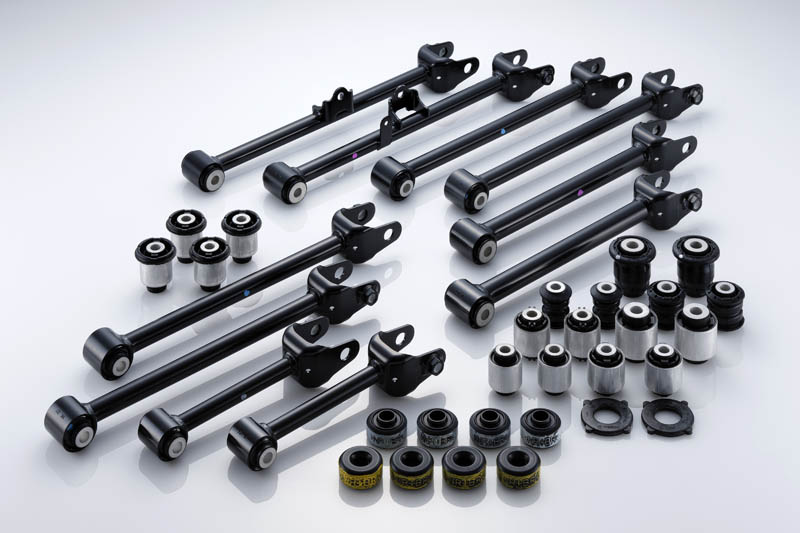 If we look at the car as a whole, it can be likened to the human body, with each component having a similar equivalent to a body part. As we’ve discussed in previous articles, the chassis acts as the skeleton of the car; by following this example, parts such as control arms and suspension linkage act as the car’s limbs. Much like human limbs, the joints on control arms and suspension require something to prevent friction. For humans, we have cartilage at our joints, whereas vehicles use bushings.

Suspension bushings are small, round parts placed at the joints of your car’s suspension components. Bushings come in a wide variety of types of materials to suit different use cases. As insignificant as they may seem, these small little devices find importance in your car’s suspension due to the sheer amount of them used. The ND Mazda Miata, which uses double wishbones in the front and a multi-link suspension in the rear has over 30 bushings. By swapping out all of these bushings, one can imagine the change it will bring.

In the case of passenger cars such as the Honda Civic and Toyota Corolla, the factory bushings are designed to provide low cost, durability, and comfort. These bushings usually consist of an inner and outer sleeve with a large rubber inner insert; the insert helps absorb vibration and noise that would otherwise be transmitted to the cabin. Under most driving conditions, rubber bushings are the best choice; unfortunately, the rubber rigidity which is ideal for most production cars falls short when placed into a performance driving scenario.

Bushing Deflection - What is it?

Bushing deflection is what occurs when the material in a bushing (rubber in this case) is deformed due to external forces. If you’ve ever rubbed an eraser too hard and noticed it bending one way and another, you’ve experienced what bushings go through when overloaded. Suspension geometry and alignment is only effective if the components do not move or change position. Bushing deflection occurs when cornering loads force the inner sleeve to move out of the center as the rubber compresses on one side. Due to the vast number of bushings in varying places, the effects it can have on handling are significant.

A tire can only exert its full cornering force if the contact patch is making full contact with the road surface. When vehicles with independent suspension are faced with bushing deflection,. the front control arms will move in relation to the frame. When the control arm is forced to move, the wheel is forced to move with it, causing the camber value to become positive. When the rear camber value changes on a rear-wheel drive car with an inexperienced driver at the wheel, the loss in traction can cause oversteer.

The steering linkage on your car uses rigid links and joints, resulting in very little deflection when exposed to high cornering forces. Due to the bushings used for the control arms, deflection can cause the arms to move while the linkage stays in place. When the deflection occurs, the steering angle changes even if the driver holds the steering wheel steady, resulting in “twitchy” steering.

A wheel’s toe angle can have a direct effect on a car’s handling, for better or worse based on the situation. In the past, Porsche’s use of a Weissach Axle on the 928 reduced oversteer by having the toe adjust itself mid-corner. The Weissach Axle was essentially a modified version of a semi-trailing arm suspension setup; the front pivot bushing from the trailing arm was replaced by a short link, which causes the rear wheel to toe in as the load on the wheel increases, acting as if the car had four-wheel steering.

On the 2nd generation (FC) Mazda RX-7, a special bushing that was designed to deflect after forces of 0.4G or higher acted on it was used. The end goal of this was to have a similar effect as the Weissach Axle while using a traditional semi-trailing arm layout. This special bushing only allowed the deflection to let the car toe inward. In other cars with trailing arm and semi-trailing arm rear suspension, bushing deflection will cause the toe to move inward when power is applied, while braking the toe moves outward. With an inexperienced driver at the wheel, the toe’s instability is detrimental to driver confidence and the overall driving experience.

Replacing Factory Bushings - Choosing The Right One For You

Even though bushings are a wear item, their replacement is largely ignored by many drivers. The rubber used in the bushing can wear from driving wear and tear as well as weather changes and old age. If you’re looking to change out your bushings either due to wear or to reduce/eliminate deflection, it’s important to choose the right type

Installing factory rubber bushings will provide those looking to restore comfort, noise, and handling to factory levels with the solution they need if they are not looking for performance. This is the best choice for most drivers.

On the other hand, aftermarket rubber bushings usually use rubber with a higher durometer (hardness) than your factory bushings. These bushings are less prone to deflections but still keep many of the advantages associated with rubber bushings including low cost, vibration/motion absorption, and low noise.

Urethane bushings are a popular solution for drivers looking to eliminate deflection due to their cost and stiffness, however, these aren’t perfect. It is a common misconception that urethane bushings work in a manner akin to that of a hard rubber bushing, however, that is not the case. Due to the nature of suspension joints moving, a bushing must be able to allow movement, usually in the form of rotation. With rubber bushings, the soft nature of the material allows a bushing to twist under load. Due to this deformation occurring in the rubber itself, there is no need for the bushing to be lubricated.

Urethane Bushings are so stiff that they technically work as bearings, so a sliding motion must be allowed on the inner surface. As a result, Urethane bushings require frequent greasing to provide smooth operation. Once the grease wears out, the urethane begins to bind to the metal surface, causing squeaks and knocks as the suspension moves. Eventually, the urethane will stick to the suspension joints, causing them not to operate correctly. Some bushings have an inner sleeve that has grease retention channels to cut down on maintenance intervals, however, periodic lubrication is still required.

Steel Bushings operate similarly to urethane bushings - they are essentially bearings and require periodic greasing in order to work properly. Steel bushings do not have any deflections, however, NVH is sharply increased. These bushings are used in some race cars where noise and vibration are not a concern.

Nylon Bushings are more expensive than Urethane bushings and they require periodic lubrication, however, these far outlast rubber bushings, with many lasting upwards of 100,000 miles. When the outer sleeve is fitted with a zerk fitting, you can easily lubricate the bushings without having to constantly disassemble control arms.

Provided that your new bushings allow for rotation without binding, you will not see much of a difference in ride quality. To keep the parts moving freely, many of the solutions described above must be greased when necessary to allow for the necessary motion. The main noticeable difference is the increase in road noise being transmitted to the cabin. To many, the benefits from the increased performance of harder bushings far outweigh the negatives, but ultimately the choice is yours. Solid Bushings are available from Legsport while hardened rubber bushings are available from Autoexe on our online store.